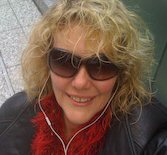 Hi, I’m Kimberly Wiefling, founder and president of my own consulting business, executive editor of the Scrappy Guides(TM), and the author of “Scrappy Project Management © – The 12 Predictable and Avoidable Pitfalls Every Project Faces”, growing in popularity around the world, and published in Japanese by Nikkei Business Press.  The biggest compliment that anyone has ever paid me is that I am a “force of nature”.  Actually, I’m not sure they meant it in a positive way – they certainly could have been referring to destructive forces like hurricanes, tsunamis, earthquakes and the like.  Nevertheless, Mother Nature is one of my favorite gal pals, and I’m pleased to be associated with her in this way.

My dad was a welder, my brothers were both welders, and if I had been born a boy I probably would have been a welder, too! But, as luck would have it, I grew up in a time when girls weren’t encouraged to be welders.  So I went to college instead, earning a B.S. in chemistry and physics and a M.S. in physics.  But don’t be so quick to write me off, ‘cause I’ve got marketable skills, too!  For example, I earned a marksman’s ribbon while in the U.S. Air Force right after high school (I used my G.I. Bill money to pay for college), where I learned to repair electronics equipment.  And I spent 10 years working at HP in various engineering and technical jobs, including one which involved a long stretch of explosion testing and other destructive testing of lovingly hand-crafted one-of-a-kind R&D prototypes.  (My motto was “When it absolutely, positively has to be destroyed overnight – bring it to me!”)  I got bored with all of the stability and job security of HP, so I quit and joined a series of failed startups (not all my fault!) and then started my own consulting company during the dot-com bust of 2001, not exactly the most hospitable environment in which to launch a business.  I lurched fitfully forward for 3 long years before my big break came – a chance to work in Japan with my Japanese “sister”, Yuko Shibata of ALC Education, Inc. starting up their Global Management Consulting Group.

Now I do more than half of my consulting work in Japan, traveling there every month with a team of people who deliver intensive workshops which enable participants to achieve what seems impossible but is merely difficult.  (That’s my specialty!)  These global leaders emerge from these programs with new eyes to see the opportunities in which we are all swimming, a global mindset, and the determination to solve global problems profitably – for their companies, and for the sake of all people of the world.  It’s like a dream come true for me, and my experiences have ranged from hilarious to deeply moving.

Read all of the juicy details at my consulting website Wiefling.com.

“Never stand begging for that which you have the power to earn.” – Miguel de Cervantes

Read Kimberly’s tale about the making of Scrappy Women in Business here.