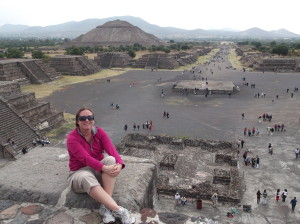 After working in High Tech for 12 years, Daisie Hobson had had enough!  She had traveled all over the world and experienced poverty that put her humble background to shame.

One day while walking through a park in Cairo she had young girls and boys following her around, welcoming her to Egypt and asking her questions about the US. It was then that she decided that she wanted to do more than throw down money in the countries that she visited.  She wanted to make a difference; she wanted to be the change that she expected of the world.

A year later she was headed to Mexico as a Peace Corps Volunteer.  She quit her job where she was making ridiculous money, sold her house to the bank and donated all her things to friends and family.  She said “adios” to the bay area and decided that she was going to work towards making the world a better place and learns Spanish while doing it!

Unfortunately, what the world wanted and what Daisie wanted didn’t initially mesh.  She imagined living in mud huts, digging ditches, teaching children English while sitting in the dirt.  What she got was an air conditioned office, constant internet access and teaching children English in her apartment a block away from el Centro.  She was designated the “Project Management Specialist” for Peace Corps Mexico (http://daisie.org/).  Sure, she was learning Spanish, but she was once again working for the “man” or “hombre” and was stuck in an office.  She decided immediately it wasn’t much different than working in the US.  In the US she had a day job she didn’t like, but it was her night job and her volunteerism that filled her heart.  She decided to do the same in Mexico.  By the end of her service, she was mentoring 15 children and at least 10 adults.  Her heart was so full it broke, when it was time to say goodbye.

Since she lived near the Peace Corps head quarters in Mexico, she was often asked to speak to the new trainees.  The advice she often gave was…if you heart isn’t filled in your day job, find something that fills it in your spare time!  The Peace Corps asks that volunteers have secondary or community projects outside of their main project, and Daisie found it in working with the children in her community.  Others found projects in orphanages, helping pueblos implement solar ovens, water projects etc…

Mexico and/or the Peace Corps aren’t unique in their needs for volunteerism.  The US has needs in all areas:  tutors, mentors, helpers, counselors, and friends.  If your heart isn’t filled by your day job, maybe you need to fill it by working in your community; tutoring, mentoring, donating goods and preventing violence.

Daisie says, “Stop complaining about the state of your community and start doing something to improve it!”

Daisie recently returned from her service in Mexico, but is determined to continue to serve.

Daisie Hobson is originally from Missouri where she got her BS in Ceramic Engineering, she got tired of the cold so she moved to the hottest place in the country, Arizona.  After many sunburns and air conditioning freezer burns she moved to California where she got her MS in Organization Development.  She is currently preparing for her next adventure!

She also kept the blogs while she was at the Peace Corps: http://daisie.org/