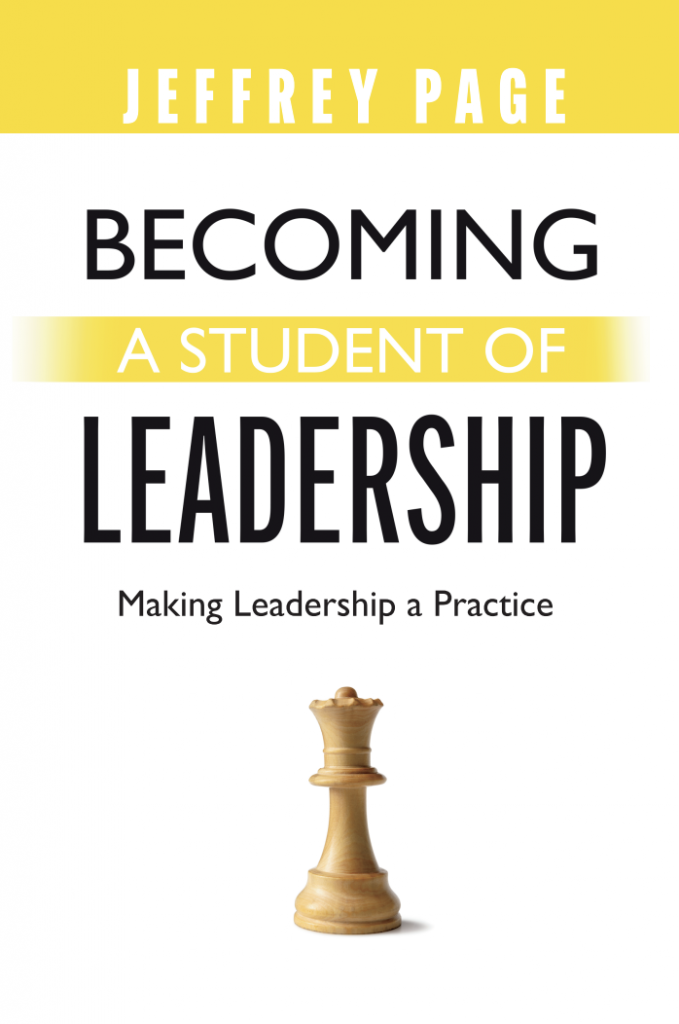 If EVER there was a book excerpt MADE for our blog, THIS IS IT! AND Jeff mentions CLUCKSTERS and CHICKENS!! What could be MORE scrappy??!! Enjoy scrappy gal pals! – Kimberly

Becoming a Student of Leadership – Making Leadership a Practice is a book about leadership in the broadest sense of the word. It asserts that we all serve as leaders in some way, and we need to become students of leadership to learn how best to lead from our various positions within an organization. As students, we must practice with a drive to continually improve and with the humility to know that we’ll never be finished learning. The most effective leaders spend less time trying to prove what they know and more time creating opportunities for everyone to learn.

The book is written as a series of stories, meditations, and essays about various aspects of leadership including the influence of ego, the importance of humility, the power of radical candor, and the ability to address adversity with generosity and an assumption of positive intent. Many of the pieces present stories about Jeff’s work and life experiences — and often about his mistakes and shortcomings — that led him to revelations about how to become a better leader.

Jeff felt the following excerpt of “Becoming a Student of Leadership” might resonate with readers of the “Scrappy Women” blog – and not only because of the word “scrappy” is in the title. As you will see in the excerpt below, Jeff and his wife Lisa admire and applaud the scrappiness of daughter Nicole…

When my wife Lisa and I think of our daughter Nicole, there’s one word that usually comes to mind: “Scrappy.”

Describing Nicole as scrappy is an expression of our fondness and admiration for her bold and determined, go-getter attitude. We don’t think of the word’s more quarrelsome connotations. If anything, Nicole is conflict-averse.

When Nicole was attending University of Maryland (UMD) as an undergraduate, it would be hard to imagine someone getting more out of a college experience. In her first year, she found an on-campus job with the university’s human resources office and another job at a local college hangout called Clucksters (better known as “Cluck U Chicken”). Somewhere in this mix, Nicole found time for her studies, and she has distinguished herself admirably.

During her four years of college, Nicole researched, pursued, and found employment in an eclectic series of jobs, internships, and volunteer positions. She worked as a lifeguard, served with a program helping to settle refugees, did volunteer work in a Rwandan orphanage, and worked for two years as a resident advisor in the dorms.

Nicole, who is my stepdaughter, always passionately embraced the African roots of her Congolese-American father. She has traveled to Africa (Democratic Republic of Congo, Tanzania, and Rwanda) on numerous occasions, often traveling by herself. After graduating from college, she decided to find a job and settle in Kinshasa, the capital of Congo.

While Nicole possesses a deep, abiding love of African culture, in general, her greatest passion is African music and dance. As a young girl she became obsessed with African dance and spent hours on end in her bedroom practicing and mastering a long list of popular Congolese dance routines. Those who know Nicole well often wonder which came first for her as a child — learning to walk or learning to dance.

Nicole first began performing her African dance routines publicly (outside her bedroom) when she was in the fifth grade, wowing an elementary school talent night crowd with her deft moves.  I’ll never forget when she decided to perform her routine at her middle school talent night before a much larger crowd. As Nicole walked out onto the big empty stage, all by herself, the crowd erupted in great cheers. Meanwhile, Lisa’s face turned bright red, watching her young daughter doing something so public, so bold and daring — something Lisa could never imagine herself doing. Nicole’s performance offered the crowd a wonderful introduction to African pop culture, while also knocking them off their collective feet.

Nicole went on to enroll a few of her friends in her dance routines, and she choreographed and performed them all through middle and high school, including several well-attended performances at the Library of Congress. In her first year at UMD, she joined an African dance group, continuing her lifelong passion for choreographing and performing a mix of traditional and popular African dance.

Whether pursuing her passion for dance or seeking out academic courses and work experiences that respond most meaningfully to her interests and passions, Nicole has consistently demonstrated scrappiness in making interesting things happen in her life. What I find most poignant is that Nicole’s scrappy nature comes across as deeply life-affirming and fulfilling. She radiates self-knowledge and self-confidence without ever appearing arrogant. She knows what she wants in life and goes after it with a quiet but steely determination.

Lisa and I observe Nicole’s scrappy nature with fondness and admiration because we both know this quality will bring her success and fulfillment in her life. We have both known people with every imaginable combination of intelligence, credentials, and connections, but who have failed to achieve their full potential because they lack an internal fire, confidence, and determination to jump onto the stage, grab hold of experience, and create a life alive with possibility.

We could all benefit from adding a little scrappiness to our nature.  Nicole’s got her scrappy down.

With over 30 years of professional experience building and leading high-performing teams, Jeff Page is still working on his leadership practice. He is currently working as the vice president of operations for a small government IT consulting business, Precise Software Solutions. Prior to his current work in the private sector, Jeff spent over 27 years working for the federal government. He served as the chief operating officer at the Corporation for National and Community Service (now named AmeriCorps) from 2014 to 2017, and as budget director from 1998 to 2005. From 2005 to 2014, Jeff worked as the chief financial Officer for the Library of Congress. Jeff began his career as a Peace Corps volunteer in the Democratic Republic of Congo, and he spent 12 years working with the Peace Corps – 10 in Africa and two at Peace Corps headquarters.

Early in his career, Jeff decided to become a student of leadership, studying the leaders he worked with (good and bad) and transforming his learning into an intentional practice. He has approached his leadership practice with a persistent drive to learn and with the humility to know he’ll never be done learning. As part of Jeffrey’s learning process, he has designed and led leadership development programs, facilitated workshops, given talks to professional groups, offered courses, published articles, written a leadership blog, and mentored and advised executives, senior managers, and aspiring leaders on leadership topics including emotional intelligence, radical candor, ego, humility, work relations, communication, and customer service.

Jeff was born and raised and attended college in northern California. He currently lives in Silver Spring, Maryland, where he enjoys spending time with family and friends and walking his dogs Xena and Piper with his wife Lisa.

Purchase Becoming a Student of Leadership