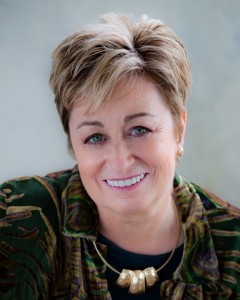 Maybe it was my name.

My parents named me Kevin, although no one had the courage to tell me how, uh, unusual a name like mine was for a girl.  That is, until 3rd grade when a little boy named Kevin joined the class and I asked the teacher why his parents had given him a girl’s name.

I was also blessed with parents who told me that I could do anything I wanted to do that I put my mind to.  I’m sure they didn’t intend for that to include my early career as a motorcycle mechanic and several years as an owner-operator in the long-haul trucking business.

I did start out trucking with a partner—a wonderful guy who taught me how to drive 18 wheelers.  Then the truck cab got smaller and smaller and our relationship reached a point where we needed separate trucks. That’s how I wound up running my own 18-wheeler across 34 Western States and three provinces of Canada.

But it was mine.  So were the muscles I developed, and the ability to back a tractor-trailer up around a blind corner. And so was the attitude I developed along with it.  In all fairness, the attitude had been developing since I was old enough to talk, but I digress. 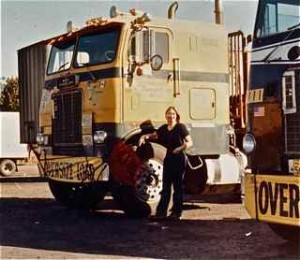 The attitude also helped me develop a sense of humor in some difficult situations.  Often I was the only woman for miles who was not a truck-stop waitress, hitchhiker or a hooker. At one point, several of my fellow truckers were convinced that I must be hooking on the side.  This, after weeks of hard labor 18 hours a day, fighting bad weather, and showering twice a week if I was lucky.  I was annoyed.

Nothing I could say would talk them out of this perspective…until I looked at one of them and said: “If I’d been hooking on the side, I’d have enough money to repaint my truck.”  Apparently the truth of what I said finally hit home, and the conversation turned back to whether a Cummins engine was really superior to a GMC.

I learned a lot from the people I worked with.  I learned how to tie down 20 ton loads to an open trailer, with ropes, chains and binders, straps and winches. (Leverage is your friend) I learned how to help people in need, and that out there on the road we really needed to hang together and help each other in a crisis. I learned to take responsibility without even thinking about it, because sometimes it’s just you and the elements. And I learned I could be strong without being defensive.  Even standing only 5’1” on a good day.

What I learned dealing with dispatchers, brokers and managers has also served me well in my academic and business careers:

I did eventually earn a Master’s degree and a PhD, where I learned a lot—but nowhere near as much as I learned in the School of Hard Knocks…and I bless every moment.

ABOUT THE AUTHOR:
Dr. Kevin B Kreitman – Trained in systems, cybernetics and engineering, Dr. Kreitman’s major concern in life is why systems that look like they should work, don’t–and how to design systems that do. Her years as a motorcycle mechanic and over-the-road trucker focused her on the value of “getting the rubber to meet the road.” She has developed unique, insightful, humorous approaches to help organizations tune-up their operations, as well as overhaul them to expand, re-focus, and move into new markets.  A sought after speaker and trainer, she is committed to making people and organizations stunningly effective and self-sufficient.