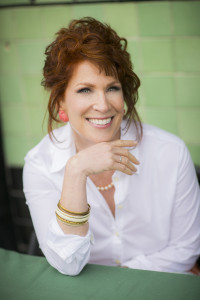 “Here, can you make us dinner out of this?”  Bobby, the blond keyboardist from the rock band I had just joined, handed me a grocery bag with a whole chicken, a box of spaghetti and a few dejected looking vegetables in it.  I was a little taken aback  – but as a 20 year old wanna-be singer, I just accepted the grocery bag and went to work in the kitchenette while the band started their rehearsal in the living room.   ‘Chick Singer’  was the actual title I had just accrued.  And honestly, chick singer was what I thought of myself back in 1979 – I was the gal with the voice and the tambourine and the dress.

It took me a few years to sort out what the rest of my talents were – agent, human resource manager, bookkeeper, arranger, song-writer and, most important:  Band Leader.

The role of women in music has thankfully gone through a fundamental change in the past 35 years.   We are seeing a stream of extremely talented young women show up on classical, pop, rock and jazz bandstands.   I know that every time a sax or guitar phenom answers the supreme unspoken question from the guys in the band  “it’s cool that she’s a woman, but can she play?” by PLAYING with fire and brilliance – we are changing minds and hearts about women and music from within.

I tour regularly with a show I’ve written about the history of women in jazz and blues “Wild Women of Song: Great Gal Composers of the Jazz Era” and I do love getting a chance to alter the cultural memory of the role women played in the creation of American popular music.

But when I was asked to submit something to this Scrappy Women blog – I knew I wanted to address this ‘chick singer’ part of my own musical journey. As I’m reading the entries in this website, I am hoping that some of my experiences might be useful to these smart business babes!

I’ll tell you a secret:  most singers, not just women, understand very little of what musical information the band is hoping to get from the musicians they work with.   The term ‘chick singer’ has come to mean a lot of negative things to a band – the singer who is often uninformed, or arrogant, assuming the band will just back them up and then fuming when the poor musicians don’t devine what he or she had in mind.  There’s a terrible joke:  Q: “How can you tell when a chick singer is at the door?”  A:  “She can’t find the key and has no idea how to enter”.   With a sigh, I must admit that was probably true of me in my earliest days of singing.  And conversely, I was often frustrated that the band didn’t seem to be paying attention to my own attempts to direct an arrangement or tempo or ending.

I began to watch very closely just how the instrumentalists were able to convey what they wanted from their band mates.  There were many subtle gestures and cues, almost a code, which I made my business to learn.  I took aside band members and asked for their guidance.  And I began to pay attention to each musician’s  unique ability, and how to also be aware of what might be their own weaknesses.  I learned how to put my bands in the best possible light where each moment on stage made us all feel the way artists like to feel:  confident but not complacent, informed yet supremely free to create within the framework which I have explained in just a few words.

I do think that one of the most fun things about my job is not just being the vocalist (although of course I love to sing) but being the Band Leader.  Just this New Year’s I walked onto a stage of mostly unknown to me musicians who, due to  the sudden illness of their usual vocalist and bandleader, needed me to call off 2 ½ hrs of straight dance music, without any rehearsal or set list.  I was grateful for my many years of professional experience – for those years spent learning the code, and for the confidence I felt from the band once they heard my first words (“okay this is a 12 bar blues in E, we’ll take it from the five chord, shuffle groove, one, two, one two three four!) and of course, for all those happy folks packed onto the dance floor all night long.

Not accepting the labels handed to us as women in any business, learning our trade, paying close attention to the needs and abilities of our team – isn’t that what Scrappy Women do?

Pamela Rose is a Bay Area vocalist, bandleader and educator.  Her 6 CD’s are available on Amazon and CDBaby.com and when she is not touring nationally with her show Wild Women of Song: Great Gal Composers of the Jazz Era  her Bay Area performance schedule can be found by going to www.pamelarose.com