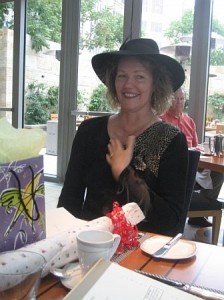 About 15 years ago a woman I barely knew, the wife of a coworker, was listening to me describe the challenges I faced as a project manager at Hewlett Packard. “You’re not using your feminine power!” she suddenly pronounced, as if she’d just discovered the cause of some mysterious chronic illness I’d been suffering from for a lifetime. My first reaction was, “Use my feminine power? I sure hope not!” Since I was obviously perplexed, she further explained that this included nurturing behaviors like bringing food and drinks to meetings, and expressing other characteristics that I’ve heard described as “soft skills” by HR pros. I figured I’d missed that in the job description.

You see, I was working in high-tech, and for over a decade I’d painstakingly stamped out any semblance of femininity in my work. After earning a Master’s degree in physics, a field in which women are almost as scarce as on-time schedules, I’d entered the high-tech engineering world, a profession with an equally abysmal track record of attracting women. Why on earth would I want to associate myself—in any way—with anything female in my work? I was sure I would appear weak and ineffective to my colleagues, and quite possibly my salary would decrease.

Maybe I was being a little paranoid, but until recently, I have done my best to ignore the gender issue in my career. I’ve steered clear of “radical feminism,” and I most certainly didn’t want to be perceived as “nurturing.” However, this past year I’ve been working on a book project, Scrappy Women in Business, which prompted me to reflect on the role of women in the workplace, and my own experience as a female in a predominantly male work environment. As a result of this, and the changing nature of the work environment, I’ve come to value what my colleague’s wife called my “feminine power.” But my initial hesitation wasn’t completely unfounded, given the research on women in the workplace.

Even If I’m Not Nurturing, Chances Are People Will Think I Am

It turns out that it might not matter whether I am nurturing or not—being a woman, it’s likely that I will beperceived as nurturing by CEOs and other top executives. Catalyst, the leading global nonprofit dedicated to expanding opportunities for women in business, published a study in 2005 under the intriguing titleWomen “Take Care,” Men “Take Charge:” Stereotyping of U.S. Business Leaders Exposed. Their research demonstrated that, although women and men often lead in similar ways, they are perceived very differently by both male and female senior executives. Regardless of the reality, women are perceived to be better at supporting and rewarding while men are perceived to be better at delegating and influencing upward.

Unfortunately, these unconscious biases impact the perception of competence and fitness for promotion, though with the growing emphasis on teamwork and collaboration these days, I’m not sure in which direction. We can, however, measure the results by observing the difference in participation of women and men at various levels in the professional world, and in the relative compensation of women and men.

Back in the 1970’s women represented only 10% of the musicians in an orchestra. That number has risen over the years to over 35%, and a Princeton University study in 2000 found that a big chunk of that gain was due to the switch to blind auditions. When the decision-makers can’t see whether the musician is a women or a man, more women are hired. A study by The Anita Borg Institute on the recruitment, retention, and advancement of technical women found that women are sometimes preferentially eliminated during the resume review process, even if the interview process is unbiased. Another study specifically comparing evaluations of resumes by randomly assigning a woman’s name found that resumes bearing a woman’s name were rated lower by both women and men. (Perhaps women should use initials instead of first names on resumes, or hiring managers should have the names masked before reviewing them.)

Of course we’re all biased in many ways. All human beings are. Our assumptions and beliefs unconsciously influence our decisions, and our brains are clever enough to keep this process hidden from us so that we think we are making rational decisions based on the facts. Don’t think you’re biased? You can find out in about 15 minutes. Harvard University’s “Project Implicit®” provides a test in exchange for using your data in their studies. You will be randomly assigned one of a variety of bias studies, but you can repeat the process to experience them all. Based on experimenting with this several years ago, I found that I have a slight tendency to associate technical topics with women. Go figure!

According to US Department of Labor statistics, only 10% of employed engineers were women at the turn of the century (2001). And while the salary differential in engineering has largely disappeared, the employment differential remains large in all but the life sciences. Even project management remains a profession with some degree of gender disparity, in both employment and pay. The 2010 PMI Salary Survey suggests that only 40% of US project managers are women (based on survey respondents), and that the salaries of women project managers are “considerably lower” than that typical for men (about 10%). Karen Klein’s 2005 article “It’s a Women’s World, Too” does make the point that women are entering the project management profession at rates around double that of men, but still acknowledges that female project managers face barriers to success that are peculiar to women, such as excessive humility and a tendency towards self-criticism.

The Road to the Top Winds Uphill All the Way

In spite of the possible risk, and because I’m past typical childbearing age (something executives admit is a real barrier for women in hiring and promotion in off-the-record true confessions), I’m less inclined to eschew my feminine qualities in my work these days. I’ve found that these qualities have become increasingly valued for their importance in delivering extraordinary business results. The incredible diversity of teams, increased focus on alliances and partnerships, the growth of open innovation, crowd-sourcing, and collaboration on a massive scale (facilitated by the internet), have all made people keenly aware of the power of group genius and the importance of a more collaborative style of leadership. I’ve noticed that the work I do as a project manager increasingly involves facilitating interaction rather than giving direction; perhaps it was always about that and I just didn’t notice because I was suppressing my nurturing side.

It turns out that female versions of leadership improve bottom line business results. In a 2004 Catalyst study, companies with a higher proportion of women on their top management teams enjoyed a 35% greater ROE (Return on Equity) than those with the lowest. Although I’m wary of the trap of stereotypes, in the past couple of years I began to wonder if maybe women and men really do lead in some fundamentally different way. And, with more profit at stake, I hope it’s something that can be learned by anyone, even nurturing-averse me.

There are plenty of pop psychology discussions about gender differences, including the somewhat unimaginatively titled “Are Women Better Project Managers Than Men” on the Toolbox for IT Project and Program Management Blog. Puh-LEESE! This kind of conversation is similar to my Japanese friends asking me to describe Americans. “Which one?” I ask. Like all simplistic questions, the answer to whether men or women are better project managers is, “It depends.” It depends on which woman, or which man, and which project, and in which situation. While statistics can help us understand trends in the aggregate, it’s foolish to apply that data to any specific individual or situation. Those who carelessly apply averages to individuals do both parties an injustice. Let’s not deepen the gender divide by participating in these kinds of debates. Instead, let’s look at facts.

Is there gender bias at work in project management, and the business world in general? In my project leadership role I make it a practice to focus on the results produced, not the intentions of my team. Customers care about results, not intentions. I think the same approach may work well in this situation. I have no real way of knowing whether there is bias in the process, but I do know that there is a difference in the outcome—the participation and compensation of women relative to men. The measurable data from Catalyst certainly demonstrate a disparity:

Of course, root cause analysis is important, but the root cause of being overweight has been well known for years and still I can’t lose 5 kilograms. I personally don’t care whether the remaining disparities between women and men in project management—and the business world in general—are a result of accident, unconscious bias, or a devious plot. The causes no longer interest me. Making and measuring progress does. What’s measured tends to get attention, and frequently improves.

The Coming Shortfall in Working Age Population in the Developed World

Based on a report by the Stanford Center on Longevity, (PDF) it looks to me like it’s in all of our best interests to make workplaces more attractive to human beings in general, and—in fields where they are under-represented—to women in particular. In a decade or two, the shortage of working-age people will be an economic crisis in some parts of the world. Japan and Germany in particular will face at least a 20 percent shortage in the coming decades. (That’s why I don’t worry about women’s equality in the workplace in Japan—it’s coming!) We’ll need everyone’s participation if businesses are going to successfully meet the challenges facing humanity.

The Anita Borg Institute found that technical women leave their companies in mid-career at twice the rate of men. Companies are losing women, especially at the mid-career stage. Catalyst reported that women cite four major reasons why companies lose female talent: “lack of flexibility (51%); glass ceiling issues (29%); unhappiness with work environment (28%); and feeling unchallenged in their jobs (22%). Only 5% report being downsized and only 3% say they were victims of sexual harassment.”

Of course, the workplace isn’t all that hospitable to men either. A 2007 Gallup Institute study on wellbeing concluded that 77% of all workers hate their jobs. HATE! Wow. That’s much worse than being unhappy with the work environment or feeling unchallenged in a job. I’m no expert at organizational development or the link between worker satisfaction and profit, but I’m guessing this is NOT good for project success or bottom line profits. A little more nurturing probably wouldn’t hurt any of us, or our chances for project success either.

If Being More Nurturing Will Increase Project Success, Bring on the Nurturing!

I was educated as a scientist, and if I were just looking at past data I’d conclude that expressing my so-called feminine side in the high-tech business world would put me at a bit of a disadvantage. But that’s kind of like driving while only gazing into the rearview mirror. With almost everyone hating their jobs, increased emphasis on collaboration, and the coming shortfall in skilled workers, I’m thinking that a more nurturing work environment is going to be a competitive advantage.

In fact, I’ve been experimenting with a more nurturing approach in my work in Japan, and it’s yielding excellent results: noticeably improved performance in various individuals, faster response to my requests, and more enjoyable working relationships. It’s working so well that I’m tempted to try it out on this continent. My only concern is whether it’s possible to be both scrappy and nurturing at the same time. Considering the potential 35% higher ROE, I’ll have to give it a go purely for financial reasons.