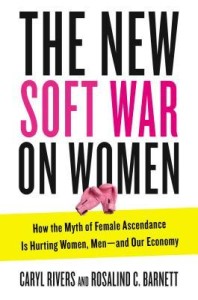 Women who want to be successful are often urged to act like their male colleagues. But new research says this strategy often backfires. When they behave they same way, women and men are often judged very differently, leading to consequencesthat are poles apart.

This problem is part of what we call “The New Soft War on Women.”

The direct, in-your-face gender discrimination of the past has faded, but cutting- edge new research finds that bias hasn’t vanished. It’s just gone underground and is gaining strength, based on stubborn stereotypes about what women can’t do.

It’s why both men and women too often judge the same actions very differently,when they are taken by one sex or another.

Men at work are richly rewarded, and are seen as heroes when they step out of the macho stereotype to offer a helping hand or a shoulder to cry on. They get heaps of praise. (Oh, what a wonderful guy!) When men are helpful to others, they are given high performance ratings and they are seen as likely to succeed.  In contrast, when men don’t help, they suffer no consequences. They are just being “guys.”

Women are expected to be caring. Such behavior is taken for granted– and ignored. Women get no credit for caring, because that’s what they are “supposed” to do. But unlike men, when women violate the “caring” norm, they are harshly penalized. They are seen as unlikely to succeed or advance in their company. Moreover, they are judged as nasty, selfish, manipulative, and unworthy of promotions. So it’s a lose-lose for women. They get no benefit for caring, and they get slammed if they don’t care.

Men are seen as leaders and rightfully ambitious workers when they take risks. If he fails, his superiors dust him off and say, “It’s not your fault; try again next time.”  There’s little downside when men take risks.

Women who take risks are looked at with skepticism and are carefully scrutinized. Because of this wariness, women are hesitant to take the kinds of risks they are told they need to take in order to succeed.  Moreover, women who fail don’t get second chances. No one’s there to dust them off.  Risk-taking is a high stakes strategy for women.

Men who are competent are seen as forceful, worthy of promotion and likely to succeed. It’s all a plus.

Women who display competence often pay a price. They are seen by both men and women as unlikeable–unfeminine, aggressive, conniving and untrustworthy— as “downright awful.” Such perceptions hurt them on the career ladder. Who wants to work with a “bitch?”

Working in a mixed-sex team

Men who work with women in a team automatically get credit for the team’s success. The man is assumed to be the leader, even if the woman has actually done most of the work and made most of the decisions. Often, he is promoted while she is not.

Women in a mixed-sex team are seen as relatively less competent, less influential and less likely to have played a leadership role. They do not get credit, even when it’s due.  As a result, women are less likely than men to be promoted.

Men who dominate the conversation are seen as powerful and forceful.

Women too often find that silence is golden.  Both men and women judge females to be more competent when they are quiet and less capable when they talk more. If women speak up at some length, even if they are in a senior position, they are seen not only as gabby but also as incompetent.

Men do not experience any roadblocks in getting hired just because they have a child.  In fact, they enjoy a “fatherhood bonus” and often make more money than non-fathers. Fathers are seen as hardworking, striving for advancement, and reliable.

Women pay a price if there’s any hint in their resumes that they might be mothers. They may not even get inside the door. In one study, managers who had the power to hire and fire were sent resumes identical except for a hint that some women were childless and others were mothers. Managers called back the childless women twice as often as the equally qualified mothers.

Women employees experience a “motherhood penalty” that can be as high as a million dollars over a lifetime.  Mothers are viewed as having divided loyalties, as unreliable, distracted, and therefore are less likely to be hired or promoted.

Having an MBA or other advanced degree

Men with advanced degrees get substantial raises and promotions.

Women earn more advanced degrees than men but   get a far lesser payoff. Female MBAs earn, on average, $4,600 less than male MBAs in their first job out of business school. Male chief financial officers are paid an average of 16 percent more than their female counterparts of similar age at U. S. companies. The Sloan Foundation reports that “Women lead in college but not in the workforce…Women’s earnings, relative to those of men, have not kept up with their gains in educational attainment.”

Men are expected to be hard workers and they reap the benefits of their efforts. Hard work pays off for them in higher pay and frequent promotions.

Women are not expected to be hard driving and ambitious. When they are, they are seen as unfeminine and uncaring. And they pay a price for their non-traditional behavior. Over a lifetime, women with a bachelor’s degree will earn a third less (estimated $700,000) than a man with the same degree.

Men who express anger at work are judged by males and females as committed to their jobs, powerful, competent and worthy of a high salary. Blowing your stack is not a problem for a man.

Women who express anger, in contrast, are seen much less favorably. They are viewed as out of control, irrational, incompetent, weak and unworthy of a high salary. Only if women can demonstrate that they have a reasonable, non-emotional reason for their anger will they avoid being labeled.

Simply being male or female

Men benefit from the male stereotype–forceful, competent, assertive, a leader. Unless they demonstrate otherwise, the stereotype helps them.

Women need to be aware of these traps to avoid stalling out in the workplace. But women can’t do it alone. Companies need to mean it when they say they want gender diversity. New research finds that while ninety percent of companies about the globe have such policies, too often these programs lack clear goals, evaluation and enforcement, and less than half have criteria that allow for them to be evaluated. There’s little commitment to the programs in the C‑suite, and it gets weaker as you go down the organizational ladder. At lower management levels, a paltry 17 percent of managers support diversity programs. It can be disastrous for a young woman if early in her career she runs into a manager whose mind-set, conscious or otherwise, is that women don’t have what it takes.

Caryl Rivers is a professor of journalism at the College of Communication at Boston University. A nationally known author and journalist, she received the Helen Thomas Award for Lifetime Achievement from the Society of Professional Journalists.

Dr. Rosalind C. Barnett is a senior scientist at the Women’s Studies Research Center at Brandeis University. Her pioneering research on workplace issues and family life in America has been sponsored by federal grants, and she is often invited to lecture at major venues in the United States and abroad. Dr. Barnett has a private clinical psychology practice and is the author of scholarly and popular books and articles.