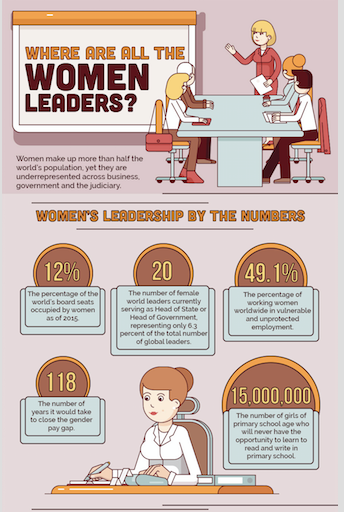 “We need women at all levels, including the top, to change the dynamic, reshape the conversation, to make sure women’s voices are heard and heeded, not overlooked and ignored.” – Sheryl Sandberg

Over the past century, women have made huge strides towards achieving gender equality. Following on from decades of hard work and activism, we are now seeing an inspiring number of women taking up powerful and influential leadership roles across the worlds of business, law and politics.

However, while the percentage of female leaders is higher than ever before there is still much work to be done. Despite massive advancements, women still comprise a mere 12% of board members and only 6.3% of national leaders across the world. For every Oprah Winfrey and Angela Merkel, there are millions and millions of women who are still unfairly losing out on leadership opportunities.

What are the obstacles facing aspiring women leaders?

Gender bias still sadly remains a major factor holding women back from leadership positions. Whether unconscious or overt, gender discrimination can take many pernicious forms running the gamut from stereotyping right through to abuse and harassment.

Research has also found that a staggeringly high number of women experience career struggles after having children. Known as the “motherhood penalty” this is often manifested through difficulty gaining employment, getting promoted or obtaining a higher salary.

Why is it important to have more women leaders?

Study after study has revealed that female leadership is a win-win for everyone. Women leaders allow for a greater diversity of leadership, problem-solving and communication styles. What’s more, women leaders lend fresh voices and new perspectives on issues. In terms of organisational benefits, a greater number of women leaders can lead to higher profitability, a healthy national economy and public policy innovation.

If you would like to find out more about women and leadership, do check out the below infographic from the team at Trainwest.