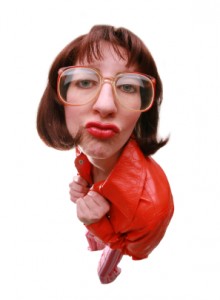 Nibble on this tibdit of Julie’s chapter. Enjoy the whole tasty meal in the Scrappy Women in Business book. Yummy! – Kimberly

I grew up in Iowa, Cedar Rapids, Iowa. I had much of the small town naïveté, but as an athlete, I also had a great drive and confidence. The combination led me to think I could do anything. So when I was too young to know anything, and too naïve to be scared, I started a business. I was 22 years old. What did I know? I believed I had something to offer, so other people believed it too. It worked for a while and the success and ultimate failure of that business has framed my life. After my own scrappy small business failed, I decided to spend my career helping women entrepreneurs succeed. This chapter is a collection of what I learned from my own experience and their successes.

I have had the privilege of watching thousands of businesses take off. I have seen women who were square pegs in every job they ever held develop outrageously successful businesses. I have seen women who are survivors of domestic abuse create jobs for other people and be the beacon of hope for their communities. Inside every success story is a scrappy entrepreneur, a woman who did something extraordinary where other people would have given up, and frequently many people along the way were advising her to give up! But that’s not what scrappy women do.

One Day I Said “I am a Consultant!” … and They Believed Me

Part of my graduate program was to get an internship. During my second year, I was given an internship with the City of Chicago. I negotiated compensation as part of the internship, and was called a “consultant” for a whopping $15/hour. As I networked and met people around the city, they asked me what I did, and I explained that I was a consultant.

Scrappy Tip: Say you own a business … and you do! Business will often come to you.

Will you be able to do what it takes to start your own business? Will you commit yourself to your business with complete focus? Will you believe in yourself and your value enough to ask for what you want? Will you ask for help? Will you be unique and unforgettable? If you are willing to do all of these things, my experience indicates that you will be running your own successful business someday.

After reviewing over a thousand business plans a year over many years and seeing how people fare over time, here is the great lesson I’ve learned. Are you ready? People who have the most academically impressive business plans almost always underperform those who have a scrappy business plan. Not that business plans aren’t important—they are. But scrappy action beats intellectually appealing theory any day of the week.

Scrappy Tip: Don’t get stuck in analysis paralysis. Plan some, then … Just do it!

Knowledge Is Power, But …

Have you heard the story about how women who are elected to Congress spend their freshman nights in their hotel rooms studying every new bill so they can be experts on the content of the bill? The men, on the other hand, spend their nights networking, aligning themselves with the power brokers, asking others about the pros and cons, and getting first-hand knowledge of the perspective of key influencers. It is certainly important to be prepared. But enough already! Knowledge is power, but relationships with the right people are more powerful. Get out there and network with the power brokers. If you think you are one, and you act like one, you will become one.

Scrappy Tip: No amount of preparation and studying can match the power of networking. So go out and network!

Working in the field of microenterprise, watching women and men start businesses, I see a pattern not unlike the example of women in Congress. Men will put out a shingle, say they are in business, network, boldly ask people to invest in the business, and set aggressive goals. Ladies, I am afraid that the record shows that we gals, on the other hand:

– Don’t think big enough in our business ideas, frequently confusing giving back with making money. (And we can really do both!)

– Over-prepare before taking the leap, feeling like everyone else knows something that we don’t.

– Confuse requests to invest in our business with asking for help, something we think we’re supposed to give, not get.

If you are starting a business that typically takes 3–5 years to grow to a certain size, you’ll be hard pressed to convince investors that you will be able to do it in a year. Investors want to see the story behind the numbers, and they want to feel confident that your numbers are realistic.

Enough said. Just repeat that last Scrappy Tip over and over again, and get busy!